On Thursday, Lionel Messi was presented with the trophy for being the top scorer in European leagues. In his acceptance speech, he made sure of thanking his team-mates, without whom it would not have been possible.

The man the whole world is talking about has capped a dream year by picking up this major award, all thanks to the amazing 34 goals he scored in the Spanish Liga last season. 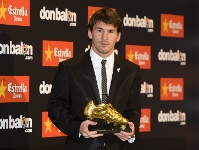 The striker was not alone at the Estrella Damm factory in Barcelona, with all of the major media present. Although his parents could sadly not be there, Messi had plenty of other people there to support him, including president Sandro Rosell; vice president for the economic and strategic area, Javier Faus; vice president for the social area Jordi Cardoner; director of professional football, Andoni Zubizarreta; and team-mates Carles Puyol and Xavi Hernández.

Messi dedicated the win to all of his team-mates, who have all contributed to the phenomenal successes in recent years. “I have always said that this is my home and that I am quite happy here. I have a contract until 2014 and I’m calm.” Asked who he felt should win the Balon d’Or this year, the Argentinian said “I hope it’s one of our squad. Xavi and Iniesta both deserve it because they did so well at the World Cup.”

Leo Messi has put together an extraordinary collection of individual awards, namely the FIFA World Player, Balon d’Or and now the Golden Boot, the three most important individual trophies in world soccer.

Just before the ceremony, all of the guests applauded in memory of Eduard Manchón, the famous FC Barcelona winger in the team of the 5 cups, who died on Wednesday at the age of 80. Hristo Stoitchkov, Carles Rexach and Estanislau Basora, who attended the event, were also honoured. 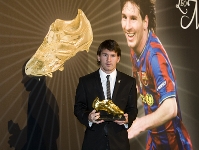 Last to get individual treble

The Golden Boot makes Messi the fourth player to have won all three of the biggest individual honours in the sport. It will never happen gain, because the Balon d’Or and FIFA World Player are now to be made into a single award, the FIFA Balon d’Or. Before the Barça striker, the treble was also won by Marco Van Basten, Ronaldo and Cristiano Ronaldo.