The midfielder has been suffering bother for several weeks, and for that reason, has been left out of the Spain squad.

According to the Medical Services “For several weeks, the player has been suffering bilateral aquiline tendinopathy, which has reached an acute stage. The player, the manager Pep Guardiola, the FC Barcelona Medical Services and national manager Vicente del Bosque have decided that the best decision would be for him not to play with the Spanish national team in the games against Lithuania and Scotland in order for him to remain in Barcelona and do recovery work.

Tomorrow, in consideration of the player’s condition, we will decide whether Xavi Hernández will also miss the game against Mallorca next Sunday." 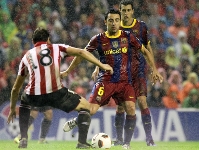