Draw and Messi’s return in numbers

Draw and Messi’s return in numbers

Barça salvaged a point from the ever-difficult trip to Rubin Kazan. Villa scored his first penalty for Barça, and Leo Messi returned from injury among the many positives to take from the game.

- Barça’s total dominance was reflected by their 79% possession of the ball.

- Barça wore green in the Centralny Stadium, and shot more than twice as much as their opponents (16 to 7). They also took 10 corners, compared to two for the Tartars. Both sides hit the post once. 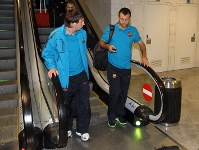 - Javier Mascherano started his second game, playing 60 minutes just in front of the defence. 73 of his 77 passes were good) and he topped the team in recoveries, winning 10 balls.

- Rubin Kazan still have yet to lose to Barça, with two draws and a win in three meetings.

- Villa scored his first penalty for his new club. He was the regular taker for Zaragoza, Sporting and also for Spain.

- This goal was the 400th for FCB in Europe’s premier club competition.

- Ten days after getting injured at Atletico Madrid, Leo Messi came on for the last 34 minutes. He had time to make four shots, 25 passes, four dribbles and to be fouled twice. 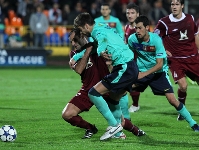