Villa and Alves happy with a draw

Villa and Alves happy with a draw

David Villa and Dani Alves admitted after FC Barcelona’s 1-1 draw against Rubin in Kazan on Wednesday that taking a point from the game was a bad result given the circumstances.

The Blaugrana duo felt that the team should not be disappointed with the outcome despite dominating possession throughout the encounter. On the half-hour mark Rubin broke away and took the lead from the penalty spot and Barça then took advantage of a foul in the area when Andrés Iniesta was fouled to draw level through Villa. 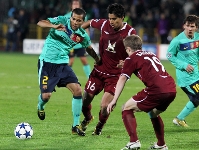 Rubin employed six defenders and made life very difficult for Barça and for that reason Alves was not dismayed not to have won. “Given the circumstances of the game we go away feeling content,” the Brazilian said. “As a team they have played very well defensively. They had a line of five behind a line of four. We could not find much space and that cost us. We should have read the game better.”

Villa agreed with his team-mate: “They defend very well and they closed up the space very well,” he commented. “It was very hard for us to penetrate between the two back lines. Then the penalty made things even more complicated for us. If we had taken one of our early chances then things would have been different.” 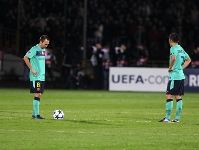 FC Barcelona’s squad were due to travel back from Kazan straight after the game and will not train on Thursday. Instead, the players will return to training on Friday morning at 11:00 at the Ciutat Esportiva as preparations begin for the visit of Real Mallorca at the weekend.