Guardiola: "We did everything to win"

Guardiola: "We did everything to win"

Josep Guardiola felt that his FC Barcelona side did enough to claim all three points from their Champions League encounter in Kazan after having to settle for a 1-1 draw against Rubin.

“The team attacked well and did everything to win,” he said. “I am pleased with the players. We did nothing wrong and only needed to just put one of our chances away. I felt that we created enough opportunities to win.”

Rubin and Barça both scored from the penalti spot and Guardiola felt that his team found it difficult against a side that played with six defenders. “They played well defensively,” he added. 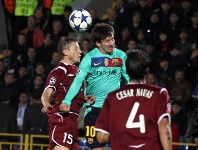 “The Blaugrana boss did lament the fact that his team did not take the lead at any point in the game."With these types of teams going in front can be a little advantage," he explained. Barça also drew in Kazan last season in a game that also saw them create enough chances to win.

Rubin's stance reminded Guardiola of the approach of opponents such as Chelsea and Inter in the last two Champions League semi finals that Barça played in as the defensive systems were set up to stifle his team.

Lionel Messi his return to action in the second half having missed the last three matches and coach Pep Guardiola was pleased. "We will try to help him continue improving on his road to a full recovery," the trainer explained. "We are happy to have him back."