Leo Messi was the focus of all attention in the only Barça training session in Kazan, which took place under intense rain.

After arriving in Kazan on Monday night, the players trained this evening at the Centralny Stadium, the place where they drew with Rubin a year ago. But rather than the intense cold of their first visit to Tartarstan, this time it was rain that had to deal with. 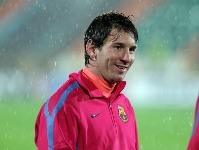 Guardiola’s charges were able to test a pitch in near-perfect condition. Messi, who has yet to be given medical clearance, seemed able to train perfectly normally. He was all smiles during the only 15 minutes of the session that were open to the media. 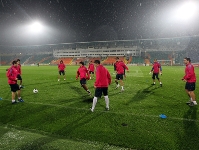 Last season, this same pitch was lost under a blanket of snow and the grass was taller than what the Barça players are used to. But this year there can be no complaints about the surface. The new turf in the Centralny impressed everybody, and should ebenfit the Catalan’s famous passing style. 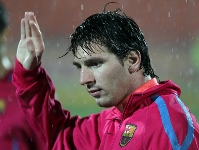