Barça manager Pep Guardiola expects as touch a game with Rubin Kazan as they had last year, but refused to reveal whether Messi would be playing.

On the eve of their Champions League meeting, Pep Guardiola had nothing but praise for their opponents, Rubin Kazan. He expects a “terribly tough match” comparable to the ones they played last season. “Those game showed us what a good team they are. They took five out 6 points away from us, they are that good. I have seen very few teams that can defend so well”. 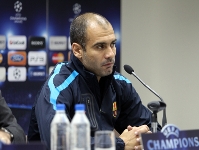 After the Tartars did so well in the previous Champions League, almost qualifying for the second phase, Guardiola expects “it to be very similar to last season … it’s the same structure, with a few changes, as we saw in Copenhagen. Although they’ve lost ‘Chori’ Domínguez, they have signed some top quality players”. He added that better attacking is the key to getting better results against the Russian League club. 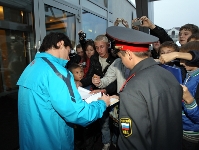 Of course, he was pressed for clues regarding Lionel Messi. “First we’ll have to look at Leo’s ankle. He’ll train, and then we’ll speak to him and the doctors and then we’ll decide. It’s a very important match, bit his fitness is what matters most.” The Argentinian was able to train with his colleagues once again today in the Centralny Stadium.

Guardiola is generally optimistic about what he has seen his team do so far. “You always have to be careful. But I’m feeling nicely confident … the recent spirit shows that the players are assimilating new and old concepts … I think we’ll have a good year. The symptoms are good”. 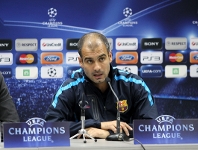 Before Guardiola had spoken, Rubin Kazan manager Berdyev had described Barça as “the best team in the world”. The FCB boss thanked him for his words, but added that “he said the same thing last season and we dropped 5 points against them!”