“It is important for Leo to recover properly”

Vilanova: “It is important for Leo to recover properly”

Tito Vilanova knows Leo Messi well, and knows the striker would play of he could. But the Barça assistant manager advises caution, because if things are rushed, there is a risk of long term injury.

Messi was in the party of 19 that travelled to Kazan on Monday, even though he has not been given medical clearance. Josep Guardiola’s assistant spoke about the situation from the Tartar city, saying “Leo always wants to play and this injury is progressing well each day”. 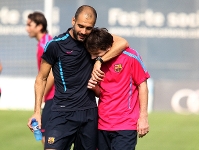 Before heading to Kazan, Messi trained with the squad for first time since getting injured. Said Vilanova, “we are watching to see how he feels … it is important for him to recover well, with injuries like this, sometimes if you don’t recover properly, there can be long term problems”. So, for him, Messi’s fitness a more important issue tan Wednesday’s result against Kazan. “It is important but not that much, it’s only the second game in the group” he said.

We know them better

As for Rubin Kazan, Vilanova said that in preparing the match “we have looked back at the games they played against us … they have the same manager as last year”. Rubin stunned Barça last time with a win at the Camp Nou and “they played in a way that didn’t make it at all easy for us.” But on Wednesday, he feels they will have the advantage of knowing more about the side they are facing. 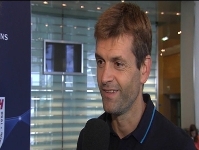