Zubi: “we have to show our class”

Zubi: “we have to show our class”

Andoni Zubizarreta believes that the experience of last year’s games with Rubin Kazan: “has taught us a number of things – we need to show our class and you’ve got to win the three points out on the pitch in the Champions League”.

Before flying out to Kazan with the squad, Andoni Zubizarreta spoke to the media at the El Prat airport and after last year’s draw in Russia and the defeat at the Nou Camp, he insisted: “we have to respect our rivals, whatever their names are”. 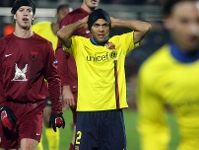 According to “Zubi”: “Rubin surprised us at home last season and that really set up the group. The meteorological conditions and the difficulty of the rival made it a very complicated task when we went over to Kazan, but this season we are going after having played the first game and the time of the year means that the climate will be more benign. I’m sure we will find difficulties on the pitch all the same”.

Reporters asked Zubi about how he felt the league was going so far and how he reckons Real Madrid are doing: “the only thing we have to focus on throughout the season is what we do ourselves. That is our maximum concern. I’m happy with how things have gone, apart from the Hercules game. We’re growing into our style of play, which is our point of reference”. 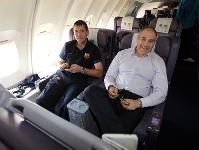