Club President Sandro Rosell is travelling with the squad to Kazan - his first trip with the team since taking over earlier this year. 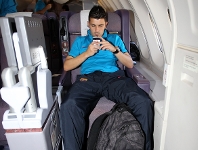 The squad left the Ciutat Esportiva Joan Gamper -where they trained this morning - at 12.15 and caught a 13.20 flight to Kazan. The flight will take five and a half hours and the players will be taken straight to their hotel on arrival.

Most of the squad are repeating the trip they made last year to Kazan, but in contrast to last season when the game was played in early November and the players had to deal with a temperature change of 22ŗ in Barcelona and -5ŗ in Kazan, today’s forecast for Kazan is a maximum of 17ŗ and a minimum of 11ŗ. 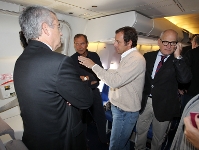