Adriano has been ruled out of FC Barcelona’s Champions League game against Rubin Kazan in midweek after suffering an injury against Athletic Club.

The Brazilian was replaced by Maxwell during the game in San Mamés on Saturday and tests have confirmed that he has suffered a muscle strain in his right leg.

Barça travel to Tatarstan for the game on Wednesday night and Adriano will not be involved. The full-.back will instead remain in the Ciutat Contal to work on his recovery programme. 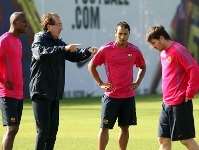 Leo Messi has continued to work on his recuperation on Sunday morning in the Ciutat Esportiva while Éric Abidal and Jeffren also trained. 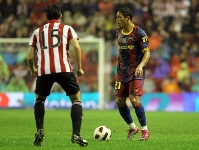