After the games at the Calderón, at home to Sporting and tonight at Athletic, Josep Guardiola has said he’d rather the team finished games off earlier rather than things staying uncertain until the end.

The FCB boss was unhappy that his players squandered so many chances tonight. “We have to show more desire, more ambition in front of goal and we need to score. Whenever we get chances in the area, we have to take them”. Nevertheless, he was generally pleased with the performance at such a difficult ground as San Mamés.

Barcelona have moved above Real Madrid, who could only draw at Levante, but for Guardiola that is “just an anecdote. Points and championships are won on the field and that’s where we have to do our work.” He was concerned by the difficulties the team had in the early second half. “I don’t know what would have happened if Javi Martínez had scored instead of hitting the post” he said.

Guardiola didn’t want to get involved in any analysis of the sendings off of Amorebieta and Villa because “it all happened so fast, I’ll have to see on television. In our case, I want to be sure that never happens again”. And as for the whistling aimed at Iniesta by the Athletic faithful, “It doesn’t matter. The fans have the right to do that kind of thing, to cheer and boo, they have paid their entrance. There’s nothing to be said. Spanish football knows all about the way Andrés behaves”. 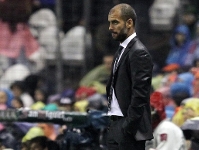 Next training Monday at 9:30

After the win on Saturday, the players will be given a rest on Sunday and won’t train again until Monday at 9:30 as they prepare for the Champions League fixture against Rubin Kazan.