Milito not fazed by defensive opponents

Milito not fazed by defensive opponents

Gaby Milito has said that the team is used to playing defensive sides like Sporting were on Tuesday night. He claims that the squad has the right resources to cope with such situations.

The Barça centre back appreciates that teams that visit the Camp Nou prefer to turn games into damage limitation exercises, saying that “over the last two years, just about every team we have faced has played like that … but until now we have managed to get through such games without too many problems”.

So, Milito believes FC Barcelona are quite used to such problems, adding that the team “has lots of solutions and lots of resources to deal with these difficulties … but looking ahead, it’s clear that we’ll have to find new ways of dealing with the problems that other teams cause us”.

There is no doubt that the absence of the injured Messi against Sporting was a talking point. But the Argentinian denied that they had changed their game plan to cover for him. “We are a squad, a group, with very good players, if at any point in the season somebody is missing, we have someone else to take his place.”

No worries for Messi 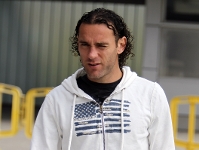 But even though the “group block is more important than any individuals” Milito did admit that his compatriot is “unique and unreplaceable”. He added that Messi’s injury “is healing very well … he’s calm and relaxed, just letting time pass and keen to get back to helping the team”.

Milito, who has fully recovered from the injury that sidelined him for so long, also spoke about the squad’s other Argentine international, Javier Mascherano: “He’s doing well, he has adapted very quickly and is settling in. I don’t think he’ll find it hard to adapt because he’s such a capable footballer. I know how intelligent he is. I know how versatile he is. He’s picking up the concepts Pep’s explaining to him very well.”

Finally, Milito had the following to say about Saturday’s trip to Bilbao: “We’ll have to be prepared for a very serious match, because we’re up against a very good team. It’s one of the toughest grounds in Spanish football. We’ll have to play the same way we have done in other games recently, playing seriously and intensely, because we won’t be playing an easy team.” 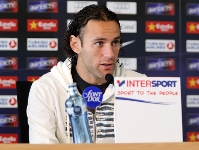 Against Sporting, Gerard Piqué played his 100th match in the FC Barcelona first team. Asked about this, given that they played together at Zaragoza in the 2006/07 season, Milito said the achievement “was especially important considering how his age.” He also spoke about the extraordinary level demonstrated by Piqué in these 100 appearances.