The first team returned to training after defeating Sporting Gijón. Last night’s side did recuperation work while the others, plus six reserves, prepared for Saturday’s trip to San Mamés.

Until October 3, when Barça play Mallorca before most of the players go off again on international duty, Barça have seven games in 23 days. With the game with Sporting now behind them, it is time to start thinking about Athletic Bilbao. There is no time to rest, and so it was straight back to training this morning. 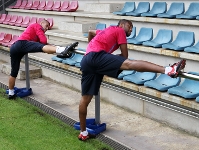 The players gathered on pitch 1 at the Ciutat Esportiva at 11.00 am. Xavi and Puyol preferred to work on specific tasks in the gym, while the injured Messi was also absent. Abidal was also given special permission by the club to miss today’s session.

The players that featured at the Camp Nou last night did their own specific work with a fitness specialist. 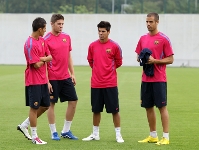 The other players trained as normal, with a big game away to Bilbo to come at 10.00 pm on Saturday. Guardiola also called upon six reserve players. Two of these, Nolito and Thiago, have been training with the first team for several days, and were joined today by colleagues Mińo, Tello, Fontŕs and Víctor Vázquez. 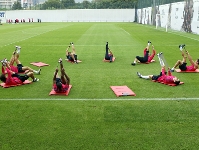 Barça will train again on Friday at 11.00, once again at the Ciutat Esportiva Joan Gamper but this time behind closed doors. Afterwards, manager Josep Guardiola will be giving a press conference.