The Asturians played a strong game at the Camp Nou and the draw was in sight right until the end. But in ll 93 minutes of play, they never managed to get one shot on target.

► So, it was a calm evening from Víctor Valdés’ point of view, who only touched the ball 28 times, and only five of those interventions were to break down Sporting plays.

► At the other end, Cuéllar had to make five saves, which was far less than visiting goalkeepers usually have to deal with at the Camp Nou.

► There was a massive difference in terms of the number of plays in the opposing area: 12 to 0. 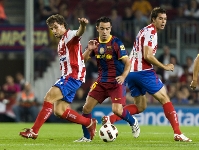 ► Xavi was by far the most active Barça player. He made 122 passes.

► Not one Sporting player managed more than 30 passes.

► Villa’s goal against Sporting was his fifth against his former team, and also his first league goal as a Barça player at the Camp Nou.

► It was the first time Barça have scored between the 45th and 60th minute this season.

► With Messi out injured, only Alves and Bojan have appeared in all seven official matches so far this season.

► Nolito was named in the FCB first team squad for the first time on Wednesday, although he did not get to play. 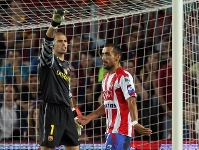 Xavi Hernández and Gabriel Milito both played their first full games of the season against Sporting. Until now, Xavi had started four games and was substituted in all of them, and also came on as sub in another. The Argentinian had started one match, but was substituted, and was also used once as sub.