David Villa enjoyed his first home league win and his first league goal at the Nou Camp on Wednesday night against his boyhood team Sporting and he was quick to complement them on their performance: ōit was a tough game. They closed down well and it

Villa also reckoned that many teams would come along to the Nou Camp this season with the same plan – sitting back and inviting Barńa to come at them.

The Spanish striker insisted: “I’ve felt no pressure to get goals. The important thing is to get chances – when they don’t come along it is time to worry”. Villa also expressed his hope that: “Messi will be trying to get back as soon as possible”, whilst insisting, “the squad is strong enough to make up for his absence”.

Below are some of the players’ post match comments 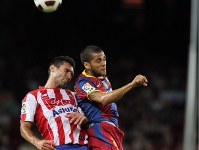 “We found it hard to find spaces throughout the game, but we found more after the break when we played better and made more chances, including the goal”.

“There’s no time to rest and the league demands a really high rhythm. Despite all these games, we hope to be up to the level expected of us at the San Mames”.

“It was a difficult game for us, but the important thing is that we took the three points”.

“We are on a good run, both in terms of our performances and our attitude. We were just short of that second goal to take the pressure off a bit, but we showed we can find the answers when things get complicated”.

“There are no easy games. The team have again stood up to be counted and made their chances”

“In all the positions I played in the game, I knew what my job was and I tried to do what was asked of me at each moment”. 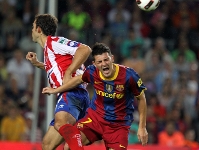 The players will train on Thursday at the Ciutat Esportiva Joan Gamper at 11.00.