The third round of La Liga games ended with a 2-2 draw between Deportivo and Getafe on Monday…. and the fourth round begins tonight with Real Madrid taking on Espanyol at the Bernabeu.

Pochettino’e team travel to Madrid after a good start to the campaign, but with strikers Osvaldo and Ivan Alonso, as well as midfielders Javi Marquez, Datolo and Ivan de la Peńa all out injured he’s had to call up two youngsters from the reserves for the game. It’s been 14 years since Espanyol last won in Madrid, but hope springs eternal and Pochettino reckons: “we’re very excited and I’m sure we are going to put in a good performance”.

Osasuna are already down in the relegation spots and have yet to score so far this season and they need to improve on their poor performances tonight when Real Sociedad, who visit for the first Basque derby of the season. Barça’s next opponents, Atletic Bilbao are also in action tonight, against Mallorca in San Mames where Feranndo Llorente, who’s scored in every game so far this season, will no doubt be aiming to stretch that impressive record.

Wednesday’s big game sees Valencia at home to Atletico Madrid at Mestalla, a ground Atletico have not won at since 2003, and with Emery’s team making a flying start to the campaign, the Madrid outfit will need to pick themselves up from Sunday’s defeat if they are to take anything away this time around. As well as the Barça game against Sporting on Wednesday, Zaragoza play Hercules and Almeria entertain Levante – four teams who look likely to be battling it out at the wrong end of the table for most of the season and all of whom lost at the weekend.

Seville may be second in the table and unbeaten in their three league games, but their exit from the Champions League, a dull goalless draw against Deportivo at the Sanchez Pijuan and a poor start in the Europa League have raised questions about the future of coach Antonio Alvarez, who has the chance to answer his critics and give the home fans something to cheer when his team take on Racing in the final game of the fourth round on Thursday. Deportivo – who’ve managed to draw all three games so far - are away at Villarreal, whilst Getafe, who managed to concede two penalties in their draw at the Riazor on Monday, are at home to Malaga. 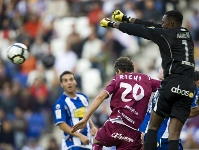