Villa: “The tackle on Messi was brutal”

Villa: “The tackle on Messi was brutal”

After watching the video of the foul by Ujfalusi on Leo Messi, David Villa reckons it was “brutal”, but also believes the Atletico Madrid man: “didn’t go into the tackle to hurt”.

Messi’s injury was a talking point at the press conference held after training this morning and whilst lamenting the loss of the Argentinean for the next couple of games, Villa insisted: “the rest of the squad is capable of making sure we don’t notice his absence”. 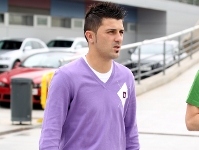 After tests showed the injury to Messi wasn’t as serious as first feared, Villa commented: “we are lucky if he’s only going to be out for 10 days. Even so we’d like him to be still here as he’s a vital player for the team”. The Spanish striker also explained that he’d seen Messi this morning and: “he was better – he wasn’t in such pain and he was more confident about coming back”. 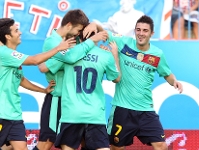 Reflecting on Sunday’s result, Villa said: “every game is just three points, but it’s also important who you beat and where. It has been three years without a win there for Barça and the win gives us an extra motivation”.

Three points the most important thing

Villa had his chances to get on the score sheet on Sunday and he believes: “if I’d been a bit more accurate or De Gea hadn’t been in such fine form, we could have won by more. The important thing though, is that the team won and took the points”. 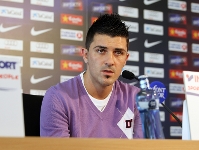 Wednesday will be a special game for Villa with the visit of the team where he started his career as a youngster, Sporting Gijon, to the Nou Camp: “they are special games and I’m happy to be playing against them as that means they are still in the top flight. They have improved this season and although I want to beat them, I still love the club”.

Vila also has a good relationship with the Sporting manager Manuel Preciado and he reckons: “he deserves a monument. We all love him because he’s made so many of us Sporting fans happy”.