Spanish League Round Up Week 3

Spanish League Round Up Week 3

After three games, the league is beginning to take shape, with all the big names up in the top six and the usual suspects already down in the relegation spots.

Valencia out in front

Valencia’s 1-2 win against Hercules leaves them two points clear at the top, but despite early goals from Mata and Pablo Hernadez, Hercules again showed that they are a spirited outfit, pulling a goal back through a Trezeguet penalty and putting Valencia under the cosh for the final 40 minutes, as Emery’s team had to hold out with 10 men following David Navarro’s sending off. Seville also got a 1-2 away win, as they saw off Malaga in the Andalucian derby, with Alfaro and Martin Caceres on target for Antonio Alvarez’s team, who were without both Luis Fabiano and Jesus Navas. Seville are level on points with Real Madrid, who also won 1-2 against Real Sociedad on Saturday. Di Maria and a deflected Ronaldo free kick gave the points to Madrid, whose boss Mourinho admitted;”a draw would have been a fair result”.

Villarreal, Atletico Madrid and Espanyol are level with Barca on six points: Villarreal inflicted Levante’s third consecutive defeat, winning 1-2 thanks to two goals from their Brazilian striker Nilmar, whilst a Callejon goal gave Espanyol a 1-0 win in Cornella against Almeria. With three goals, Nilmar is now joint leading goalscorer in the league, alongside Forlan and Fernando Llorente who got Bilbao’s equaliser in their 2-2 draw with Sporting Gijon. Manolo Preciado’s team thus come to the Nou Camp on Wednesday with one win, one draw and one defeat in the league so far, but they really should have done better against the Basques, throwing away an early 2-0 lead. Bilbao manager Joaquim Caparros sounded a warning note for Barca though: “Sporting are a much improved team on last season”.

Down at the bottom, Levante are the only team yet to take a point, but Zaragoza and Osasuna, who both lost 2-0 away to Racing and Mallorca, are only a point above them. Racing’s 2-0 win gave them their first points after defeats to Barca and Valencia, while Mallorca welcomed Rafa Nadal to their stadium on Saturday to see the team brush aside a poor Osasuna team, who have yet to score a goal this season, with goals from Castro and De Guzman for their first win of the campaign. 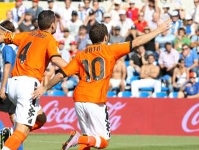