Bojan: "I have had three great years"

Bojan: "I have had three great years"

Bojan Krkic completed three years as a first-team player on Thursday and admitted that he has enjoyed his experience so far at the highest level.

Aged just 17 years and 18 days on September 16, 2007, the striker made his official debut for Barça when he appeared against Osasuna in a goalless draw. Despite the result he did not look back and has fond memories of the day. 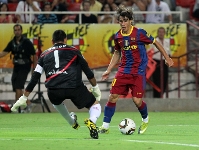 Frank Rijkaard gave Krkic his first chance and Pep Guardiola has continued to help him grow and improve. “I have learned a lot,” the starlet explained. “Every year different things happen, but I have had three magnificent seasons here so far.”

Krkic has started the new campaign full of confidence and has been involved in every official game so far. “I am very pleased,” he continued. “I have a great feeling and have complete confidence in the coach.” 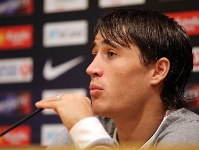 Barça have not won against Atlético de Madrid in the Vicente Calderón for three years, but Krkic believes that run can be broken on Sunday. “These things make the expectation level rise,” he commented. “The most important thing in these games though is the three points.”

After bouncing back from defeat last weekend with a convincing triumph in Europe in midweek Krkic thinks the team are doing well. “We are in a good moment. This team has won things thanks to everyone and we have all had an important input.”,” he added. 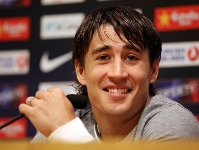 Barça TV are looking back over Lionel Messi’s ten years at FC Barcelona and Bojan Krkic speaks about his memories of the Argentinian’s time in La Masia.