FC Barcelona returned to training on Friday morning as preparations continued for the tip top lay Atlético de Madrid with a tactical and physical session at the Ciutat Esportiva.

After having a day off on Thursday the Blaugrana stars were back at work ahead of the weekend’s game in the Vicente Calderón. Gerard Piqué, Andrés Iniesta and Pedro were among the 18 participants as the trio missed out on Wednesday as they recovered from the Champions League outing. Martķ Riverola and Rubén Rochina were called up from the B team.

Jeffren Suįrez continued with his personalised recovery programme as he waits to be given the all clear by the medical team. 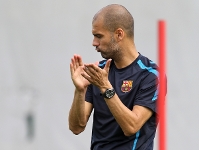 After warming up the squad played out a positional game that focussed on tactical movement. A physical circuit was then introduced with medicine balls featuring. Pep Guardiola paid special attention and pushed the players to produce even more intensity and concentration.

Pitch number 2 then hosted a game as rain began to pour down and freshened things up. 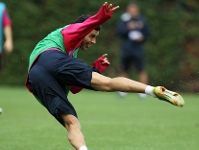 Barēa’s players will train once more on Saturday and Pep Guardiola will attend the usual pre-match press conference.