Zubizarreta in defence of goalkeepers

Zubizarreta in defence of goalkeepers

Andoni Zubizarreta claims his role as director of professional football has much in common with that of a goalkeeper. “When we lose, goalkeepers are the protagonists and when we win it’s the strikers”.

Sandro Rosell and his board chose Andoni Zubizarreta as their new director of professional football, bringing Zubi back to Barça after an absence of 16 years. He spoke to Barça TV and www.fcbarcelona.cat about how he plans to continue recent successes.

Has being Barça’s director of professional football changed you life?

“Most of all, my life is a lot more public now. It’s changed my life because I’ve come to Barcelona to live with my oldest son, but my wife and other children are in Bilbao. So, in that sense, my life has changed”.

When you got the offer, did you jump at it, or did you think hard about accepting such a big challenge?

“My heart told me to take the chance. You can’t think of a managing sport for a better team than Barça. But age makes you more rational, and you think how this team has won everything, is playing at an extraordinary level and so it’s a huge challenge. But I’m excited and my aim is to maintain that excellence”.

What have president Rosell and his board told you to do? 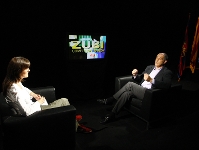 “You have to watch everything from above. Not just the pitch, but the whole youth and professional structure and work to build a project together and decide what needs to be added. The other day, Rafa Nadal, after winning the US Open, said he had to change things to stay at the top and it’s like that here”.

Did you propose Narcís Juliŕ and Albert Valentín? Did you know them?

“The club proposed them, but I knew them. Narcís and I met at an under 17 tournament when Spain were in Mexico. I know Albert since he played for Figueres and then Espanyol. They know all about professional football and Albert already has experience of running football squads. They were names that were suggested and that I liked, and they know all about Barça”.

What were you first decisions on arriving at the club?

“Most of all, restructuring the professional and youth football. In my case, I had to think about the first team, Barça B and Juvenil A. In summer, I worked on building these squads. At that point, it’s not so much about thinking about the future as it is about the more immediate situation at Barça”.

What is and will be your criteria for new signings?

“The first and obvious thing are the financial conditions. Next comes the squad, its composition and what we already have. And it doesn’t really need big changes. Neither do the coaches ask for new players very much. The third element is the Barça culture and style. It’s highly particular, very personal and you always have to know that a new player will adapt to that style. So we like versatile players, not static ones that play in just one position. They need to give us different ideas”.

So would you say Ibrahimovic failed to adapt to Barça?

“Looking at football as units, or individual actions, then Ibrahimovic would be on that list. He’s a great player but the ‘Ibra case’ was about not just playing with the ball, but without the ball as well. You have to give your team-mates options. There are lots of tactics involved, and you have to think about yourself, but also the team in general”.

Is the hardest thing telling a player they’re not right for Club?

“It’s harder to say that to the kit man, to a doctor or to a club employee that the clubs doesn’t need. Success comes down to loads of people and not just the players. The hardest thing for me was telling people in the offices that they weren’t part of our plans. Also the players, but they know what this business is like. But it’s much more painful for an employee”.

Was it hard to start your work with the Ibrahimovic issue?

“That was the most public part. Losing Chygrinski was also a complicated situation. It wasn’t easy. The Ibra case as well, but we dealt with it all very professionally. We spoke about things in depth, but on the outside a lot of noise was made about it”.

You are a good friend of Pep’s, so were you annoyed when Ibrahimovic called him ‘the philosopher’?

“It’s not so much what he said as the way he said it. And when he said it. But there’s nothing wrong with looking back on life or football and neither Pep nor me were too bothered by it. And anyway, it wouldn’t be the first time that somebody has called him that (laughs)”.

The other side of the coin in Mascherano. He has accepted a pay cut to come to Barça. Is such commitment hard to find?

“It’s the first time I’ve seen it. Then again, at Athletic some players would sign their contracts and not even bother reading what it said. But professional football’s not easy. I was surprised from the moment we contacted the player, but his intention was always to come to Barça”.

Have you spoken to Txiki Begiristain? Has he offered to help you if needed?

“I’ve respected his holidays. After seven years of intense work, he deserves a break. But I will speak to him, we’re very good friends”. 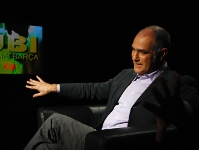 “Unquestionably. In Paris, when we were celebrating the second European Cup, he told me “this is a time to enjoy, but I have decisions to make tomorrow, I have to speak to the players whose contracts are ending”. And that was the night we won the Champions League. It’s not easy to follow a person like that”.

In this job, you will be exposed to public criticism and praise on a daily basis. How do you deal with that?

I always say that I was a keeper. Being a footballer and being a goalkeeper are different concepts. When we lose, goalkeepers are the protagonists and when we win it’s the strikers. My job is like that. I am the keeper, who has to make sure the team is organised, functioning, and from there the players in best condition carry that forward. That’s my job and I like watching football from above”.

On September 1, you said “we have the squad we need”. But it’s the smallest squad for 10 years. Is that enough?

“This squad is deceptive. We also have all the youth players that can fit into the first team. There are 19 first team licenses, but the B players can easily play too. It would be wrong to bring them up a level because they would get so few playing opportunities. We’ll see how things are in December, and promote a few players if we have to”.

The squad has the fewest foreigners for 15 years. Is that a coincidence, or are we going to see an entirely domestic first team some day soon?

“That’s unlikely. It depends on what you mean by ‘domestic’. Messi came through the youth system, but he was born in Rosario. The same thing with Iniesta. To have the entire squad made of players we have brought up is unlikely because it has always been Barça’s obligation to seek out the best players, the best talent in the world – it’s a huge market”.

Is the style indispensable?

“It’s what makes us different. But we need to evolve within that style. You could say that this Barça was inherited from Rijkaard, and Frank inherited it from Johan. If you compare the team that won at Wembley and the one in Rome, you’ll see changes in the style although the essence is the same. It has been applied to today’s football. That’s the most fascinating part of the job, adapting to new times”.

When a team has won everything as Barça has, is it difficult not rest on your laurels?

“It’s never easy, even if you don’t say so yourself, what happens around you gives it away. You can’t be completely normal when you’ve won everything and are a candidate for the Balon d’Or. But then you have to watch how they train, it’s so intense, they even want to win practice matches. They don’t look over-relaxed, they don’t feel like they’ve won everything. They have their feet on the ground. But it’s competitions that are the real challenge, both for me and the club”.

Has Barça lost height by losing Touré, Márquez, Henry and Ibra. Could that be a problem?

“When you look at the team poster, the team has clearly lost height. But defensively, it’s a good team, and it’s not as if we’re an English team, who are always physically more powerful. We might pay for that in some games, but strategic defending has nothing to do with height”. 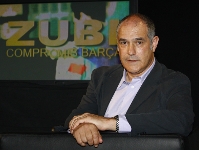 On Valdés and Guardiola

Víctor Valdés is untouchable in the Barça goal. The debate has been going on ever since you left, and there finally seems to be a solution. Do you identify with Valdés?

“I do, because I know what football’s like seen from that position. And I know how demanding it is to be the Barça keeper. It is risky to get too involved in the game. I still see football from there, and Víctor has not had it easy, and there is something distant about his image. So I do identify with him. I was always a bit distant too, but Víctor has also managed to deal with that”.

You’re back with Pep after 16 years. Now you see him every day, does anything surprise you?

“He always looks for more, he always wants to get better. He always thinks about the next match, or competition. He’s meticulous, but I’m also surprised by how close he to the players while getting the balance right. If he gets too close, he’s not the manager, but if he’s too distant, he wouldn’t be the Pep I know. It’s always hard to manage both things”.