Sergio: "We never had any doubts"

Sergio: "We never had any doubts"

Busquets told reporters on Wednesday: “If there were any doubts about the team they came from outside. We never had any doubts even though we had a bad game on Saturday”.

The Spanish international midfielder gave a press conference after training on Wednesday morning. Asked about the 5-1 defeat of Panathinaikos, he emphasized: “The score line didn’t do us justice in spite of the five gaols. We could have scored two or three more”.

"We have to forget about Saturday’s game. We always start with the same attitude and aim to play well. But the opponent is also playing, and if they play well, these things can happen”. However, he accepts criticism: “As a team we demand a lot of ourselves but you can always have a bad game. We have to find out what happened and work a little harder to make sure it doesn’t happen again”.

It could have been even better 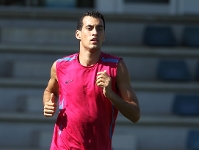 As for Tuesday’s match, he doesn’t believe it was a perfect performance: “The perfect game doesn’t exist. In a perfect game they wouldn’t have scored. And we missed a lot of clear chances”. However, he admitted that the third goal was a work of art: “The two one-two’s with Pedro and Xavi and the finishing are perfect. But the most important thing about the goal was the confidence it gave us just before halftime”.

Two years since his debut

This week it will be just two years since he made his senior debut against Racing in the treble-winning season: “The best thing for me in these two years are all the matches we’ve won. Experience shows, although it seems otherwise, that there are no easy matches. I’ve gained experience but I still have a lot to learn. I’m only 22. What aspect of my game can I improve? The long pass and shooting from middle distance”.

The visit to the Vicente Calderon

Busquets has never won a league match in Atletico Madrid’s Vicente Calderon stadium – and neither have many of the current Barça squad with the exception of Puyol, Xavi, Iniesta, Valdes and Messi, who all played in the amazing 0-6 demolition in the 2006-07 season: “We’ll have to prepare the game very carefully and play to our strengths. Statistics are there to be broken and that’s what we’ll try and do this Sunday in Madrid”.

Messi is the best in the world

Busquets echoed the sentiments expressed by the rest of the Barça squad and coaches that Messi deserves to win the Golden Ball award this year: “Messi is way above everyone and the second best footballer in the world is a long way behind. Personally I’m not surprised by what he does on the pitch. I see him every day in training and I know what he’s capable of doing. There’s no limit to what he can do”.

Asked about Villa’s goal (Barça’s second), Busquets admitted that it hadn’t been a rehearsed move. He tried a shot and by accident he sent a perfect pass through to Villa!