Thanks to his two goals against Panathinaikos on Tuesday evening, Leo Messi is now Barça’s highest ever goal scorer in the Champions League and is well on the way to finish as the CL’s top scorer for three consecutive seasons.

The 5-1 win against Panathinaikos was a triumph for the whole team but there’s no doubt that Leo Messi stood out from the rest. He scored two fantastic goals – the second in particular a lightening fast close passing move with Xavi and Pedro – and gave the final pass for Alves to score the fifth. In addition, he hit the woodwork twice and had his penalty kick saved by Tzorvas. 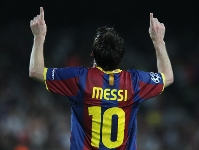 Messi now leads the ranking of Barça goal scorers in the Champions League with 27, overtaking the Brazilian Rivaldo (25). Dutch striker Patrick Kluivert is third with 21. Rivaldo scored his 25 goals in 45 matches, the same as Messi while Kluivert needed 52 matches. 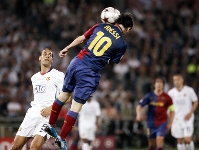 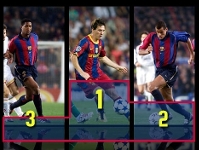