“Playing as well as that is really difficult”.

Guardiola: “Playing as well as that is really difficult”.

First team manager Pep Guardiola was delighted with his players’ performance against Panathinaikos. However, he believes that they have to keep on improving over the next few matches.

Speaking at the post-match press conference, Pep Guardiola could not hide his delight at his team’s sensational victory in the Champions League on Tuesday night: “Playing as well as we did today is really difficult. That’s the way to do it. We produced a fine performance and created a good impression. And I’m pleased to say that what we did today we have done many times before. Maybe people will say that we weren’t up against a top class team but Panathinaikos is the Greek champion and played with a ten-man defence”. 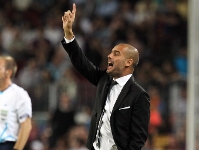 Comparisons with the shock defeat against Hercules were inevitable: “The other day we didn’t play as well. We lacked something – movement down the wings. We have to try and attack better than on Saturday. Today we moved the ball around and penetrated really well. Now we’re in form. On Saturday we weren’t. When one or two players don’t make certain moves everything stalls a bit”.

Total faith in his players

Guardiola also took the opportunity to restate his total confidence in the players at his disposal: “I don’t know if we can aspire to win titles but the players don’t have to prove anything. They have permission to play badly. Sometimes you lose in sport – we have this right. Our opponents are well prepared, they’re good, and against a ten-man defence it’s difficult. I was, and I am, proud of them”.

However, Guardiola saved his greatest praise for Leo Messi: “He’s quite simply the best player in the world by a huge margin. He’s very demanding of himself and he’s got a simple pleasure in playing and winning. The aim is to make him comfortable so that he can display all his talent”. But Guardiola also emphasized the importance of the collective: “We won’t win anything with just eleven players. We have to do it between all of us”.

Despite Tuesday night’s wonderful display, Guardiola believes the team can still get better: “We haven’t reached our ceiling yet. We still have a bit to go and we will try and up our game”. As regards next Sunday’s game away to Atletico Madrid, the manager is welcoming the challenge of taking on the current league leaders. “The game in the Calderon is a good test. We’ll be playing against one of the best teams in Europe and in the world. We’ll try and keep on improving”. 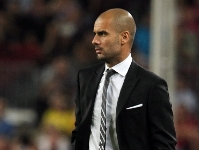 The Club’s vice-president for sport, Josep Maria Bartomeu, told us he was pleased with the result but above all with the way the team played after the slip-up against Hercules: “You learn a lot from your defeats and our coaches have fixed things. We’re not concerned – it’s a long season”. Now he’s looking ahead to the match against Atletico Madrid: “It’s a tough place to visit and Atletico are in good form. But we’ll go to Madrid to win the three points”.