Barça v Panathinaikos: Did you know?

Barça v Panathinaikos: Did you know?

The Champions League is back at the Camp Nou and here are just a few facts and figures about Tuesday night’s match that perhaps you didn’t know.

► FC Barcelona have qualified from the group stage in eight of the last nine seasons. In 2003-04 the Club didn’t take part in the competition.

► In the last three seasons, Barça have finished top of their group.

► Panathinaikos are back in the Champions League after missing out on the tournament last season.

► The Greek club’s best Champions League campaign was in the 2001-02 season when they reached the quarterfinals only to be knocked out by…Barça!

► Barça have a great record against Greek teams in the Camp Nou. They’ve played five and won them all.

► In contrast, Panathinaikos have a terrible record against teams from the Spanish league. In eleven meetings they’ve only managed one draw – the rest were all defeats.

► It’ll be a special day for former Barça player Luis Garcia, now with Panathinaikos. In 2004 he left Barça to sign for Liverpool.

► Apart from Luis Garcia, the match will provide the opportunity for former club mates Govou and Abidal (Olympique Lyon, 2004 to 2007) and Leto and Mascherano (Liverpool, 2007/08) to meet up again.

► After the opening two games in the Greek league, Panathinaikos are fifth with four points. They drew 1-1 at home to Xanthi (1-1) and beat Aris Salonica (0-1) away. 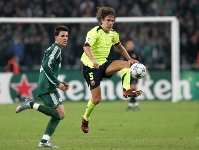 Mr Rizzola has officiated in 32 European matches, eight of them in the Champions League, including last season’s 1-1 draw between Real Madrid and Olympique Lyon and this summer’s 3-4 defeat for Sevilla against Braga. Both Real Madrid and Sevilla were eliminated. He also refereed last season’s Europa League final between Atletico Madrid and Fulham (2-1).