The first team trained on Monday at the Ciutat Esportiva instead of the Camp Nou, where they usually train on the eve of CL matches, in order to preserve the condition of the pitch. Pep has picked the same 19 players that he did against Hercules.

It was the second to last session before they open their European campaign against Panathinaikos, and took place on pitch number 1 in Sant Joan Despí under intense heat. They started at 18.45, after which Iniesta and Guardiola gave conferences in the Camp Nou pressroom. 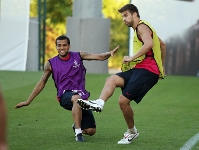 18 first team players, all except Jeffren, who has a leg injury, were joined by 2 from Barça B, Jonathan dos Santos, who was also in the squad against Hercules, and Víctor Vázquez.

Guardiola had to drop one of the those ahead of the game on Tuesday, who was Víctor Vázquez, meaning that the list is identical to the one against Hercules.

The session was attended by former Barça man Javi Moreno, by invitation of David Villa. Moreno and Villa played together in Zaragoza in the 2004/05 season. 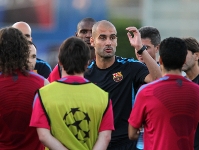 After training, the FC Barcelona players headed for the Hotel Arts. They will train again on Tuesday morning at 11.30, where they will fine-tune their ideas ahead of the game with Panathinaikos (20.45, TVE and R@dio Barça). They will then return to the hotel before heading to the stadium for the match.