Guardiola has no doubts about players

Guardiola has no doubts about players

Josep Guardiola, despite the criticism received after the game with Hercules, had said that even if this season turns out to be the worst one possible, he will never doubt his players.

Speaking to the press before FC Barcelona’s opening game of the 2010-2011 Champions League, the first team manager made it clear that regardless of results “it is impossible to doubt these players. We could have the worst season possible, but I would still have my faith in them. The other day I didn’t make their job easy for them” he admitted.

“They get all the credit” 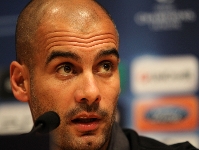 Guardiola pointed out that last season “after winning six titles in a row, they were able to get 99 points in such a demanding competition as La Liga. Having seen that, it’s impossible to have any doubts, they get all the credit. I know them, and it hurt them to lose. They are too honourable, they want to perform, and want to compete and to do as well as they know they can” he added.

He wanted to explain that there is always a reason for losing a match, but “lack of desire was not an issue. They want to carry on winning, that’s their desire, and I want people to know that defeat affected them. The other reason is that the opposition played better”. Guardiola said he had no intention of passing judgement on his players, because it is his own job “to make things easy for them. I would be angry if I felt they weren’t trying hard enough”.

Turning to the game at the Camp Nou against Panathinaikos, Guardiola said he expects “the best opponent possible”. Barça will be facing “one of the historic Greek teams” and underlined the experience in their squad.

The manager feels that playing away at the Camp Nou, their visitors are probably going to take a defensive approach. As for Barça, it is important for them to make the most of their home fixtures, and that in order to that “we have to find our game again and be ourselves again”.

Guardiola claims to know the secret to ensuring there is no repeat of Saturday’s debacle. “Teams are incredibly fragile. Just one piece has to be missing and things get fragile. We were lacking the right movement to attack well.” 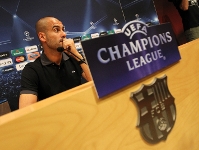 The Camp Nou pitch is not in the best of condition, and so Barça opted to hold their Monday training session at the Ciutat Esportiva Joan Gamper to thus help support the treatment programme. Josep Guardiola said that “there are some great professionals looking after the turf … not only are there high temperatures but there are also external factors that make it harder to maintain the pitch”.