Andrés Iniesta knows the team will need to be firing on all cylinders in such a demanding competition as the Champions League, where any errors can cost dear.

Speaking at a press conference, Iniesta has spoken about how Barça need to put the defeat at home to Hercules behind them, and bounce back with a win against Panathinaikos. “You just want to win again and get the good feelings back”, he said.

Champions League on his mind

He is delighted to have another bash at a European title, but knows that the road to Wembley will be a difficult one. “We will need to charge are batteries and have the right heads for such an important match … the Champions League is a very demanding competition and you pay the price for any mistakes”. 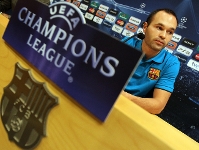 Iniesta doesn’t like to hear suggestions that so much success has knocked some of the ambition out of the squad. “I can assure you that we on fine form and ready to try to carry on winning, and we can let this chance go” he said, and added that if they don’t win “it’s not because through any lack of desire”.

Asked to explain the defeat to Hercules, the midfielder said “it was a very strange game, and it was just because of one thing, but a whole lot of things that mounted up … we found it hard to get our game flowing and Hercules were very well organised.” But he doesn’t think they should change their approach when playing sides like that. “We just have to be a physically and tactically ready for such games” he said. 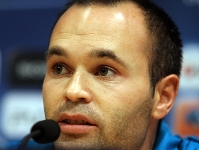 Andrés Iniesta does not think Panathinaikos will be an easy opponent. “They have some highly experienced players who have played for good teams.” He also called on the fans, saying that “this is the first game in the group and it is always important to get off to a winning start. That’s why we’re taking it so seriously”.