Four and a half months after being eliminated by Inter at the semi final stage FC Barcelona return to Champions League action when Panathinaikos visit Camp Nou on Tuesday.

The best 32 teams on the continent play the first group games of the 2010/11 season and the Blaugrana take on Greek opposition as they look to bounce back from league defeat at the weekend. Eight groups of four clubs all vie for a place in the next round and then on to the final at Wembley on May 28. 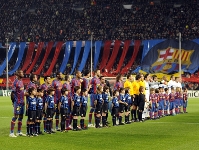 Along with Panathinaikos in Group D Pep Guardiola's side will also compete against FC Copenhagen and Rubin Kazan. The Catalan side are seen as clear favourites to win the group and progress but they will be keen to prove that on the pitch from the start. As the team with the best coefficient rating Barēa will have the weight of expectation on their shoulders as usual, but they are accustomed to coming good when the heat is on. 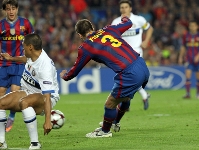 Barēa's previous Champions League game was on April when they beat Inter 1-0 in Camp Nou but were eliminated having been beaten 3-1 in San Siro in the first leg. The Italian outfit went on to meet Bayern Munich in the final in the Santiago Bernabéu and lifted the trophy after a 2-0 triumph.

Six teams will make their first appearance in the Champions League, as it currently stands, in midweek as Tottenham Hotspur, Braga, Twente, Hapoel Tel Aviv, Zilina and Bursaspor all appear.