Saturday was meant to be a special day for new FCB signing Javier Mascherano, but the Argentinian will not have fond memories of his debut after his side lost 2-0.

One hour before kick off, it was confirmed that Mascherano would be getting his first official start for FC Barcelona. He only played the first half, slotting in behind the midfield, before being substituted by Xavi with the side a goal down. Sadly, matters didn’t improve after the change. 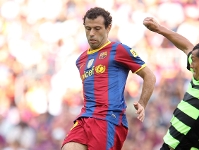 Mascherano got off to a good start, playing in the role that is usually served by Busquets, just in front of the two centre backs, Piqué and Abidal, to help get the ball going forward or sending it down the wings. He managed to make it look easy, which 47 of his passes finding his man.

Mascherano received his first Liga yellow card in the 20th minute, for holding onto Valdez’s shirt. At least he managed to break down a dangerous attack, but almost paid dearly when five minutes later he fouled Drenthe. He was not shown a second yellow, but the ensuing free kick led to the first Hercules goal.

The Argentinian said after the game that the players were understandably upset at the outcome, but that they now have to turn the page and start thinking about Tuesday. He added that “the yellow card was a shamed, it conditioned me a lot. I have to get better in that respect, this is a different league and I’ll have to adapt to it quickly”. 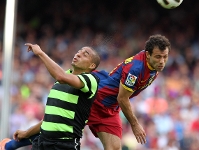