The Spanish League resumes this weekend after the false start caused by the international break. Apart from the debut game in the Camp Nou, the main interest is in Bilbao where Athletic receive Atletico.

The match up in the Basque country is one of the classics of the Spanish League and this Saturday’s encounter should be a cracker as both teams push to establish themselves in the top four. Athletic have a good record at home to Atletico but as the Madrid team’s dismantling of Sporting 4-0 on day one showed, Quique Flores’ men – led by the South American goal duet of Agüero and Forlan - will have plenty to say in the coming months. Bilbao manager Joaquim Caparros looks set to maintain the same starting eleven that secured the away win against Hercules.

There are three other games on Saturday evening, including Barça’s first home match of the season against Hercules. Racing Santander, who Barça trounced 0-3 on the opening day of the season two weeks ago, travel down to Valencia. Valencia started the season well, winning 1-3 away to Malaga and despite losing some of their big names over the summer should be far too strong for Racing. However, Racing have a surprisingly good record in Valencia, with two draws and threes wins in the last five seasons!

However, the real tension will be in Madrid where Real play host to Osasuna. Last year’s runners up could only manage a disappointing goalless draw away to a savagely depleted Mallorca on day one and the two-point gap with the front runners can’t be allowed to get any wider. Real manager Jose Mourinho has included star forward Cristiano Ronaldo in his squad after the Portuguese international made a surprisingly fast recovery from the ankle injury he picked up against Mallorca. Fellow countryman Pepe is also named in the squad for the first time after a long injury layoff but Kaka, Fernando Gago, Raul Albiol and Ezequiel Garay are all out due to injury problems. Osasuna manager Camacho, a Real Madrid legend in his own right, has a good record against his former club but it will be a real shock if he goes back to Pamplona with anything to add to the point he won against Almeria.

On Sunday, Sevilla will be looking to build on their opening day defeat of Levante when they receive Deportivo in the Sanchez Pizjuan. Meanwhile, Espanyol make the short trip down the Mediterranean coast to Villarreal and could be boosted by the return of former Barça star Ivan de la Peńa. In the remaining two games, Zaragoza could leave Malaga without a point after two matches while Madrid-based club Getafe should be too strong at home for Levante.

Finally, on Monday evening Almeria take on Real Sociedad. Both teams have the modest aim of First Division survival uppermost in their minds and will probably be content to add a point to the one they secured in their opening games. 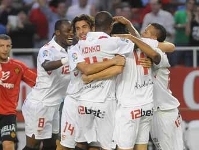