In Saturday morning, Carles Puyol received medical clearance and will therefore be among the 19 players that Josep Guardiola can choose for this evening’s game with Hercules.

A week after the team captain was forced to leave the international camp through injury, he is fit again and ready to play. Ever since returning to Barcelona, he has been insafe hands and worked hard to be ready in time. And such efforts have paid off, as he is already available to feature in Guardiola’s plans.

So, for this evening’s game with Hercules at the Camp Nou (18.00), Josep Guardiola can choose from 19 men, in other words the whole of the first team apart from the injured Jeffren, and midfielder Jonathan dos Santos of the reserves. He will have to eliminate one player to concoct his final squad.

The fact that the game kicks off at 6.00 has meant a change in the usual pre-match schedule. The team met at 11.00 at the Camp Nou for a team talk with Guardiola. Then, due to the early start, the players went straight to the hotel NH Constanza. 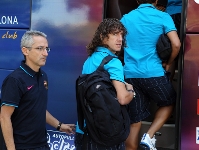