Josep Guardiola was full of praise for BarÁa's opponents this weekend Hťrcules and believes that they must not be underestimated as newly promoted teams are often full of drive and enthusiasm.

The FC Barcelona coach believes that Esteban Vigo's side will not have any fear when they visit Camp Nou on Saturday. "They are focussed, fast and like to play against you," he said. "Teams that come up from the second tier are always keen in their first few games. I want to congratulate them after returning to the top flight after so many years. Vigo has done a great job and they will come here with little pressure and nothing to lose."

"They have a good squad, very experienced, and we will have to play well if we want to win," Guardiola continued,. "I think this will be a great game for the fans to see and will be highly competitive."

Looking at his own squad Guardiola said he was delighted. "If we continue in the same line that I seen recently then we will do well. I think the supporters will continue to enjoy coming to see us."

Carles Puyol picked up a knock while on international duty with Spain but the BarÁa coach believes he could play a part against Hťrcules. "He has been very good and has trained well," Guardiola explained. "All the players have come back in good form. There have been no worries and everyone is in good spirits. They have all trained hard and impressed me." 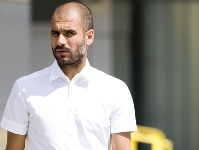 Bojan Krkic has taken the number nine shirt and is expected to continue his progress and Guardiola is pleased with what is seeing. "I think that he is a better player now than he was two years ago and in another two will be even better than he is now," he said. "He continues working every day and we will help him on his path to being a better play. Personally, I have a lot of confidence in him. He has room for improvement and with his disposition he will reach the top."

On few occasions Guardiola chooses to make his players spend time together before matches and he explained why. "I do not what them to be bored," he stated. "Hotels are boring and I would prefer them to be at home and have time with their friends and family so when they come here they will be refreshed. I trust them and they work well."

After seeing players leaving the club this summer Guardiola reflected on his ventures into the transfer market. "In the end it is the players that are good for the coaches," he explained. "I accept they say I do not have a good record with signings. I accept that I have made a mistake and done it badly. But I insist that the players were good enough. If they had had 20 consecutive games with the way we do things they would have worked. But only 11 can play. With continuity and confidence they were all fine." 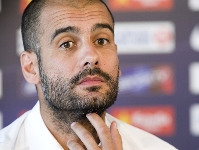 Josep Guardiola has reflected on his efforts to make Zlatan Ibrahimovic become a great player at FC Barcelona. "Ibrahimovic must know that I did not know what more I could do," the coach said. "He has been a professional for eight seasons and I have been a coach for two. I do want to thank him for his efforts and all the work and dedication that he gave during his year with us. I understand that he was not comfortable working with me, but the only thing that I can say is that it was a pleasure for me to coach him and I learned a lot from him."

On his role as coach Guardiola added: "BarÁa is made up of great players with enormous talent and it is not my place to change personalities, but instead to bring out the best in them. I hope that [Ibrahimovic] has luck with his new team and can become an important player and reach the Champions League final, which is one of his dreams, and that he will have everything that we could not give him here."