Xavi: “We have a great team”

Xavi: “We have a great team”

Xavi Hernández is promising big things this season. The midfielder knows they have the strength in depths to deal with the challenges ahead, which start with Hercules on Saturday.

Xavi Hernández is confident in Barça’s chances, saying that “we have a good team. No, we have a great team. Every day I sense we are working well. We support each other on and off the field and with a bit of luck, we can do some big things this season”.

He doesn’t agree that they are going into the season with limited resources. Xavi supports the “Guardiola way. In the squad we are 19+25, the first team players and the reserves, who are all top quality.” He also senses the players are already there to lead the next generation after Andrés Iniesta and himself, namely “Sergi Roberto, Oriol Romeu, Jonathan dos Santos and Thiago Alcántara. We can feel very safe with them”. 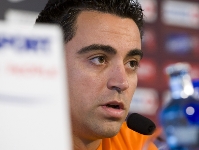 Xavi also spoke about the imminent visit of Esteban Vigo’s side. “It the classic kind of game that can get difficult for us, Hercules will be especially motivated. If we sit back, we’ll get into trouble. There’s fun ahead, with six games in 18 days. We’ll need to charge the batteries”.

Xavi was delighted to see Messi get an ovation at the end of the Argentina game, suggesting that his country’s people are back behind him. “Just one thing has changed: the scores. Messi was great at the World Cup, but Argentina wanted to name scapegoats, and singled him out because he’s the best player in the world”.

As for Ibrahimovic leaving Barça, Xavi said “neither me nor my team mates noticed what was going on. We respect Guardiola and Zlatan too”. 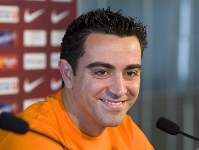 Xavi has been mentioned as a serious candidate for the Balon d’Or. That would be nice, but he insisted that “it’s not one of my objectives. When I was young I dreamed of playing for Barça and winning the League and Champions League and playing for Spain. I never dreamed of winning the Balon d’or. But I thank my colleagues and the coaches that are saying I’m a potential winner”.

If there was a Balon d’Or for managers, Xavi said “Guardiola is the best coach in the world. He works hard, he’s a perfectionist and he’s methodological. He doesn’t miss a thing and makes a note of everything happening to the group. I’d vote for him, no doubt about it”.