Barça striker Leo Messi has plenty of challenges ahead this season, two of which will be scoring against Hercules and Real Sociedad, the only teams in top flight he has never scored against.

Two of the newly promoted clubs, Hercules and Real Sociedad, will have to be especially careful with Leo Messi, because they are the only sides the Argentine has yet to make one of his victims. 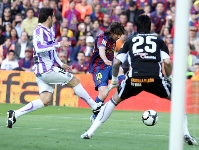 Tenerife, Valladolid and Vila-real were the three sides Messi had never sxcored against in La Liga last term, but he bagged a hat trick against the islanders, scored past Valladolid both at the Nuevo Zorrilla and Camp Nou and collected a brace against Vila-at El Madrigal. 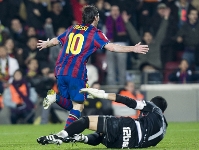 Last season Leo Messi set a new personal best with 47 goals, 34 in La Liga. He looks to be going the same way this season, with four in his account already in just two official appearances: the Spanish Super Cup and the league opener against Racing. Messi is also just one goal away from scoring his one hundredth goal with his left foot. 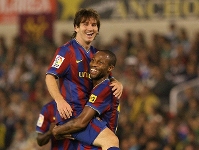 Xerez the only club to escape Messi treatment

Xerez were beaten 2-0 and 3-1 in their two meetings with FCB, but at least they can say that they are the first division side to have ever faced Messi and come away unscathed. But it should be said that in both matches with the Andalusians, Messi only played hald the match.