The last visit by Hercules to the Camp Nou was not a day Barça fans will care to remember. The side from Alicante won 3-2 and stopped Bobby Robson’s side from topping the league in 1996/97.

Hercules are back at the Camp Nou 13 years after that fateful day on January 13, 1997. Quique Hernández’s side shocked Barça by beating them on home turf, and that meant FCB missing out on the chance to make ground on co-leaders Real Madrid. 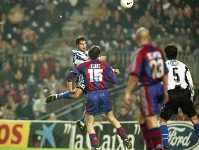 Robson’s side paid dearly for their over-confidence against the second bottom club, especially after going 2-0 up in the first quarter of an hour thanks to Luis Enrique latching onto a 8th minute Figo pass, Ronaldo getting another off a De la Peńa assist. 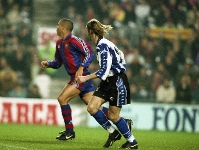 It looked like Barça were in for a comfortable ride, but they should not have taken their feet of the pedal so soon. Hercules bounced back before the break with strikes from Pavlicic and Visnjic. Robson responded by sending on Pizzi and Stňitxkov for Ferrer and Amunike at half time.

But such an all-out attacking policy backfired. Visiting striker Rodríguez added a third for Hercules, and Real Madrid reaped the benefits of this shock loss. 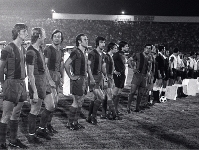 Fonder memories are associated to the friendly played on August 3 1974. FC Barcelona were the guests invited to open the new Hercules stadium, the José Rico Pérez, named after the club’s president from 1971 to 1984. The Liga champiosn won that day 4-0 with goals from Rexach, Asensi, Cruyff and Pérez. 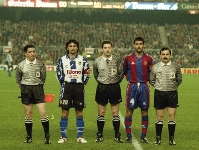 Barça dropped all six of their points against Hercules in the 1996/97 season. The 3-2 loss at the Camp Nou was followed by an even more painful one at the Rico Pérez. With just three games to go and Real Madrid leading by 5 points, Barça threw away another lead to go down 2-1. That handed the title to Madrid on a plate, who were confirmed as champions the following day.