The Spanish World Cup winning team has been awarded the Premio PrĒncipe de Asturias de los Deportes 2010 it was announced this morning.

This summer in South Africa, Vicente del Bosque’s team added the World Cup to the European title they took two years ago and their achievements have been recognised with the award, which is one of the most prestigious in Spain. All eight Barca players who were in the squad–Valdķs, Puyol, Piquķ, Sergio, Xavi, Iniesta, Sergio and Villa- can now add this award to their other honours.

Manel Estiarte, who is Director of External Relations at the club and was also recently appointed President of the Award jury, made the announcement this morning, when he also spoke words of tribute to his predecessor in the post Juan Antonio Samaranch.

According to the regulations of the Award body, the prize will be awarded to: “a group of sportspeople who have achieved new levels in a sport and with their efforts helped bring about the perfection, growth or spread of sport”. The jury commented : “the national team have created a style of play which is universally admired and is seen in many countries as an example to follow”.

The prize was awarded unanimously by the jury, ahead of the other two finalists, the Basque mountaineer Edurne Pasabßn and Ethiopian Haile Gebreselassie. The winners receive a 50,000 euro prize and a statuette designed by Joan Mir¾. 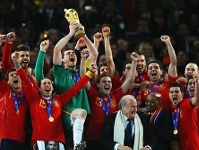 Barca’s ex-handball keeper came joint fourth with the athlete Marta Dominguez in the awards after announcing his retirement from the game following 27 year s at the club and 21 in the first team.