Josep Guardiola’s much reduced squad was back in training this morning at the Ciutat Espotiva, where the boss had just four first team squad members, who were joined by 11 players from Barca B.

After a four day break, Maxwell, Abidal, Keita and Pinto were back in training this morning as Guardiola began his preparations for Saturday’s league game against Hercules. With the internationals still away with their national teams, Guardiola again called on the B team to make up the numbers at the training session. 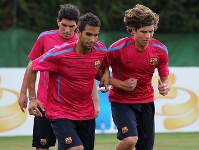 Olazábal, Montoya, Fontŕs, O. Romeu, Nolito, J. Soriano, Carmona, S. Roberto, J. Dos Santos, Muniesa and S. Gómez, all of whom started in the B team’s game against Xerez last Sunday, joined the four first team players for the session which was opened to the media for the first quarter of an hour. 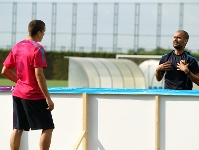 Guardiola was especially focussed on his young midfielder Oriol Romeu and spent a while talking with him and giving him advice. Puyol and Jeffren, who returned from their international call ups last week with injuries, both trained apart from the rest of the group as they fight to back to full fitness as soon as possible.

The squad will be back for their second session of the week tomorrow at 19.00, when it’s hoped a number of the internationals will be back. José Manuel Pinto will speak to the press an hour before training. 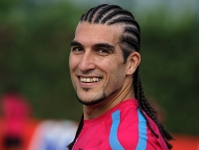 One of this morning’s biggest surprises was Jose Manuel Pinto’s new hair cut, which was the subject of much attention when he came out for training.