Buenos Aires gets the Barça look

Buenos Aires gets the Barça look

The international friendly between Argentina and Spain in Buenos Aires on Tuesday will feature no fewer than ten Barça players. No wonder FC Barcelona has been the centre of attention there in recent days.

Following on from last week’s opening round of the European championships, this Tuesday Spain and Argentina will take part in a friendly in Buenos Aires. The match will showcase the talents of ten Barça stars – three for Argentina and seven for Spain – making FC Barcelona very much the star of the show. 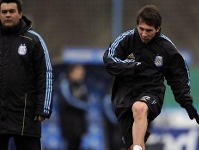 For Argentina, all eyes will be on the world’s best player, Leo Messi. The entire country will be hoping he can turn in the same quality of performance that he does week in week out for Barça. Argentine coach Sergio Batista knows him well from the Olympic Games in Beijing and is likely to play him pushed forward on the right of the South American attack.

A lover of good football

Batista, who took over after the World Cup from Diego Maradona, is a coach who places the emphasis on ball control rather than physical prowess and has gone on record as a fan of the Barça style: “I watch all of Barça’s matches because I love the way they play. They play the way we are trying to play. I love teams that can string together six, seven, eight passes”. He is also a declared admirer of the World Champions - “They’ve given value to skill over passion” – and in particular of the “intelligence” of Xavi and Iniesta.

Barça central defender Gaby Milito will make his international comeback after a two-year injury enforced absence while team captain Javier Mascherano will play his first match for Argentina since moving from Liverpool to Barça. 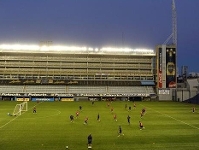 Lined up against Messi, Milito and Mascherano will be seven of their Barça team-mates - Valdes, Piqué, Busquets, Xavi, Iniesta, Pedro and Villa. The World Champions arrived on Saturday and on Sunday trained in the La Bombonera. On Monday afternoon they will train in the Monumental Stadium. The match is expected to be a sell-out. 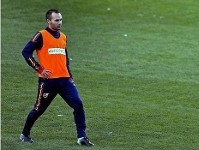 Barça striker David Villa, who comes from the Spanish mining region of Asturias, has signed a Barça shirt dedicated to the 33 Chilean miners trapped underground. The gesture has been recorded in the international press.