Samba at the Ciutat Esportiva

Samba at the Ciutat Esportiva

Dani Alves and the Brazil squad began their training get together at FC Barcelona's Ciutat Esportiva on Friday afternoon as the national team arrived and will be joined by Adriano Correia on Saturday.

With the Barça players given a holiday until Tuesday the Blaugrana training complex has been taken over by a new tenant as A Seleçăo moved in to work for four days. Coach Mano Menezes will oversee his squad as he continues to build after returning to action following the World Cup Finals. On Tuesday Brazil will round off their stay in the city with a friendly against the Barça B side.

Marcelo picked up a knock at the last moment and Barça's Adriano has now been drafted in to take his place. He will join Alves and Henrique, who is currently on loan to Racing Santander, who will work on their home ground. 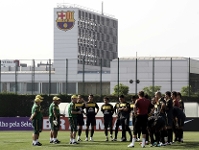 Brazil's training session was closed to the public, but there was great interest from the media and several famous names were also present. World Cup winner Mazinho took his sons to the Ciutat Esportiva to see his compatriots train.