Seydou Keita is certain that Barça will have another great season. “We have a winning squad and we’ll be going out to win” said the Malian. “But who knows what might happen after that”.

After training on Thursday at the Ciudad Deportiva, Keita spoke to the press and said he feels “very happy. I cam here three years ago and I feel at home. I’ve got no problems and I have a good feeling about things”. 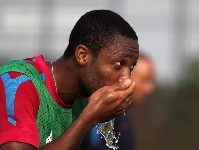 “The squad is not too small. We have good players behind us and in the reserves, who are able to help us at any moment of the season” says Keita. “So, there’s no shortage and as long as we have no injuries, this will be a good year for us”.

Asked what titles FC Barcelona can aspire to this year, Keita know what the club is all about. “Since the first day I came to the club, they have told me that draws aren’t good enough for Barça. So we have to carry on doing things well and trying to win every game we play”.

Asked if he foresees another straight head to head between Barça and Madrid for the title, the African said “I couldn’t say anything at this moment. There are teams like Valencia, Sevilla and Atlético Madrid that have a chance of being up there with us. I don’t know if it’ll be a more open championship than last season”. 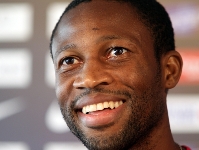 Keita also spoke about the debate regarding the tough challenges some of the star players have to endure. “I’m full of respect for Mourinho, but it is down to the referees to protect Cristiano Ronaldo. All players should have the same opportunities and that all comes down to the men refereeing each match” he said.