Barca’s Mali midfielder Seydou Keita has extended his contract with the club until 2014, depending on appearances made, with a buyout clause of 100 million euros.

Seydou Keita’s contract was set to finish in 2012, but today’s deal could keep him at the club for a further two years with an extra 10 million also added to his buyout clause. 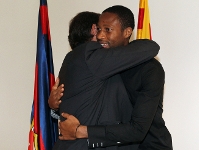 Keita, who will be 34 when the contract runs out, signed from Seville in 2008 and quickly settled into the Barca style to become a key piece in Guardiola’s plans, slotting into a defensive role beside Sergi Busquets and after today’s deal he explained: “I’m very happy to play at this club. I‘m in my third year here and we’ve won everything, but I want to stay and win it all again. Barca have given me everything and I really want to stay on here. There is a lot of pressure, but I’d love to stay here till I hang up my boots. That’s my dream, but we’ll have to see how it goes”.

The African star made clear his feelings for Guardiola, claiming: “he’s not just a good coach, he’s a good person. He’s shown his confidence in me and I know he like players with a big heart who can help their teammates and the club”

Keita also stressed the importance of the social commitment of the club to making his decision to extend his stay: “this is more than a club. The Fundacio has helped set up a school in my country to help the children and that is very important for me”. 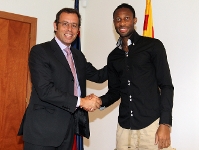