After a busy day of presentations yesterday, new signing Javier Mascherano enjoyed his first training session at the club this morning when he joined a reduced number of first team players at the Ciutat Esportiva. 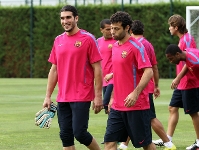 Josep Guardiola had his first chance to work with his latest signing this morning when Mascherano joined six other first team squad members and 25 Barca B players in his first training session the club and the Argentinean was the centre of attention for the assembled media. 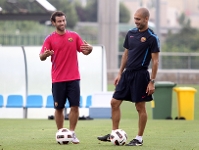 With the session due to start at 09.00 this morning, Mascherano arrived half an hour early and was met by first team delegate Carlos Naval, who presented him to his new teammates and backroom staff as they arrived.

Out on the training pitch 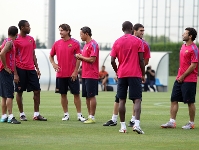 Mascherano had his first breakfast with the rest of the players, before accompanied by Adriano and Alves, he came out for his first training session under Josep Guardiola. 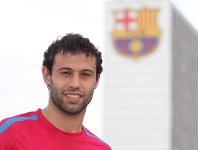 This morning’s session was the only time Mascherano will be with Guardiola until next week, as this afternoon he flies out for Argentina’s game against Spain in River Playe’s Monumental Stadium in Buenos Aires on September 7th.