Javier Mascherano is officially a player of FC Barcelona after he signed a four-year contract with the club on Monday afternoon at the Camp Nou offices.

The Argentinian put pen-to-paper on the deal that includes a €90 million buy-out clause after Barça agreed terms with Liverpool over the transfer on Friday. Earlier on Monday the player underwent a five-hour medical test in the Ciutat Contal.

Mascherano joined the Blaugrana president Sandro Rosell at the club’s offices behind the ice rink within the Camp Nou complex where he signed the contract and posed with various members of the board for photos. 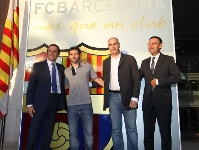 Once the deal was signed Mascherano and Rosell went outside the offices to pose for a further round of snapshots by the media in front of the FC Barcelona crest. 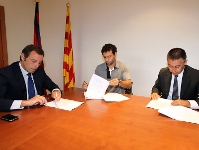