Pep Guardiola was pleased with the display and outcome of FC Barcelona’s first league game of the new season as he felt that the result was important after the 0-3 win against Racing Santander on Sunday evening.

The Blaugrana boss praised his own team for their performance as Lionel Messi, Andrés Iniesta and David Villa all scored and Víctor Valdés saved a penalty in El Sardinero. “To start with a 0-3 win is important,” he said.

Racing never gave up on their principles and that earned praise from Guardiola. “They are one of the few teams that we have played face-to-face as they did not resort to long balls,” he continued. “We watched them and doubted that they would and instead they tried their luck.”

Despite evidently being pleased with the performance Guardiola admitted that there was room for improvement. “We have lacked a spark, but that is normal,” the stated. “More games will give us that throughout the season. We are very satisfied with what we have done.”

Valdés stood out as he saved a penalty and then made other stops to earn the gratitude of his trainer. “He is Mister Reliable,” Guardiola commented. “He is very important to us between the posts and in the dressing room. Valdés gives everyone confidence. His penalty save at that moment was crucial to the game.”

Questions about Zlatan Ibrahimovic’s move to AC Milan were inevitable and Guardiola was charitable with his responses. “He is an immense player,” he said. “I wish him all the best in his new adventure. He was part of five trophies that we won.” 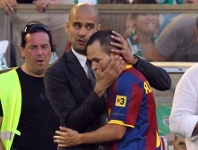 Iniesta also played very well in El Sardinero and Guardiola was delighted. “He is in great form after a very complicated year,” the coach explained. “His goal was very difficult to pull off.” 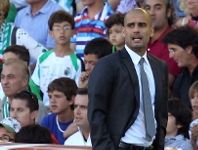 Andrés Iniesta was given a standing ovation by the Racing Santander fans when he was substituted for his goal in Sunday’s game and the winner in the World Cup Final last month. “We are an example to society,” Pep Guardiola said. “It made us all proud.”