FC Barcelona and AC Milan have agreed a deal for Zlatan Ibrahimovic to move to the Italian club on loan for the entire season 2010/11 with the Rossoneri paying all his earnings.

Included in the agreement is the option for AC Milan to make the move permanent next summer for a fee of €24 million.

If the option to buy Ibrahimovic is taken up by the Serie A club then that could see FC Barcelona save approximately €60 million.

The deal was able to be done thanks to the collaboration of the player and the willingness of his agent to conclude the negotiations. 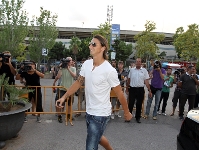