Pep Guardiola has congratulated Javier Macherano after a deal was reached for him to join FC Barcelona from Liverpool and stated that the midfielder will improve his squad.

The Blaugrana boss was delighted with the latest addition to his ranks after Mascherano joined David Villa and Adriano Correia as the summer signings at Camp Nou. After the former West Ham United enforcer landed in the Ciutat Contal on Saturday Guardiola stated: "Mascherano will give us many things and I want to congratulate him and the club, who did things well. He is much more than a defensive player. He has a great touch, keeps things simple, is very strong and will add a lot to our midfield. Also, despite being young he has great experience and we have references that he is a good person too." 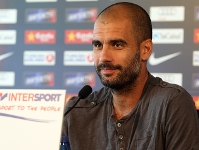 The arrival of Mascherano makes him a direct replacement for Yaya Touré, who left to join Manchester City at the end of last term, but Guardiola does not want to compare the two players. "Mascherano is different. But he will integrate quickly because tactically he is very intelligent. Both he and Sergio Busquets can play together because use different ways to move the ball out from the back." Guardiola remembered that Barça had been keen to sign Mascherano a year ago, but having both Touré and Busquets meant he was unable to.

Zlatan Ibrahimovic has been making headlines this week and Guardiola reflected on the situation. "That people are talking so much about his future is down to the time of year," the coach explained. "I am keeping a cold head and will not lose my calm while taking what I believe are the best decisions for the club." The Swedish striker has not been included in the squad to face Racing Santander. "That is my decision," Guardiola explained. "He has trained well and is in form. Because of the situation that we find ourselves in though I have chosen not to call him up. I am the one who is in control here." Should Ibrahimovic leave Guardiola was asked if he would look to replace him. "At this moment he is a Barça player. Depending on what happens we will decide. We will see how the market looks," he added. 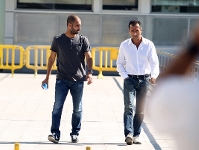 Barça travel to the Nuevo Sardinero on Sunday to face Racing Club and Guardiola is well aware of what a tricky trip it could be. "It is always a difficult place for us to go," he said. "It was the same during my time as a player as well. I have watched them and know how they play. They use different pressure and are well organised and have stand-out players like [Pedro] Munitis. I am very excited and hope that it will be a great game." Some critics have said that the league could be a two-horse race between Barça and Real Madrid, but Guardiola does not agree. "It will be completely between us," the trainer commented, adding that Valencia, Sevilla and Atlético de Madrid could be involved.

On Thursday the Blaugrana drew Panathinaikos, FC Copenhagen and Rubin Kazan in the Champions League. "Again we are four league champions in the same Champions League group," Guardiola said. "It makes me feel better to play against teams who everyone thinks will be difficult. I am not looking forward to seeing Rubin and I have utmost respect for them." The Champions League final will be played at Wembley Stadium next spring, but Guardiola is not thinking about history repeating itself. "To play the final anywhere would be great, but Wembley is currently a long way off," he stated. 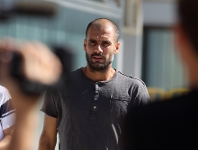 Pep Guardiola was pleased that new president Sandro Rosell chose to involve his predecessor Joan Laporta when receiving the league title trophy for last season on Wednesday evening. "It was great that president Rosell made that gesture," the coach explained. "They both did very well to do this. The players were pleased to see Laporta there. I was delighted when I heard and I glad that president Laporta came and was able to enjoy it all. As a coach I want to thank them both for doing this."