“Mascherano is a good addition to the squad”

Pedro: “Mascherano is a good addition to the squad”

Pedro Rodríguez believes that the possible arrival of Javier Mascherano will be”a good addition to the squad – he's a very strong defensive midfielder and he wins a lot of possession”.

The deal with Liverpool to sign Mascherano was the big talking point at this morning's post training press conference at the Ciutat Esportiva and Pedro was quick to praise the Argentinian, who he classed as: “a great player. Very strong in his position and a player who wins a lot of possession. He'll be a good addition to the squad”. 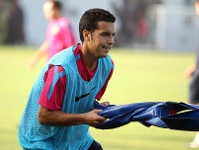 Pedro has become an important part of Guardiola's team with his run of vital goals in so many competitions, but he knows he has to keep working hard if he wants to keep his place, explaining: “I'm still training hard every day to win a place in the starting line up. I know that hard work is needed if I am to take advantage of the chances that can come my way”. 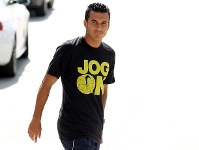 Pedro is “really looking forward” to the start of the league campaign in Santander on Sunday, but warned: “this won't be an easy game. They have a great team and it's always tough to beat them when they are at home”. The Champions League is also on the horizon and Pedro reckons Barca “have what looks like a group we could do well in, but in the Champions League any team can pull an upset”. 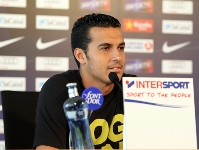 As to Ibra, Pedro simply insisted that the Swede “is training along with everybody else and we don't know what is going to happen”. Pedro also made it clear that Guardiola was more given to speaking to the players as a group rather than concentrating on any individual.