Zlatan Ibrahimovic was back in training with the rest of the squad this morning, allowing Guardiola to work with his full squad of 21 players. 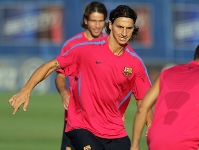 With just two days to go until Barca start their defence of the Spanish League title, the boss was able to train with a full squad after Ibra, who trained alone in the gym on Thursday after noting a niggle in his ankle, rejoined the rest of the group and trained normally this morning.

Puyol and Adriano also back

Puyol and Adriano, who both trained apart from the rest of the squad on Thursday, also rejoined the group this morning in a session which began at 08.30 and included circuit training and fitness work.

The squad will have one last training session before they travel to Santander, with Guardiola putting the players through their paces at 08.30 on Saturday morning at the Ciutat Esportiva, after which the boss will hold a press conference.